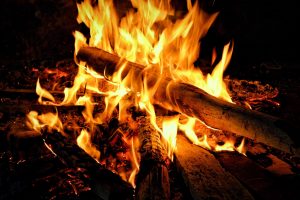 This week, author R.G. Emanuelle shares an excerpt from her lesfic romance “Pyromaniac.” You’ll be able to read it in its entirety later this summer in the anthology Elements: Tales From the Substratum. Enjoy!

RGE: For our latest anthology I chose the element of fire because it struck me as the most…well, fiery. It’s at once beautiful and terrifying, comforting and disquieting, warming to the body and chilling to the soul. For my main character, Penny, fire is both a gift and a source of horror, sometimes offering her a way to right humanity’s wrongs, but sometimes giving an outlet to her deepest fears. It’s this last one that tries to keep Penny from letting in the perfect woman when she meets her. Does it win, or can Penny get past the darkness and allow herself to embrace love?

Penny drew the curtains and sat at her kitchen table. She struck a match and let the mini pyre she’d set up catch fire. The twigs, cardboard, and various pieces of flammable materials in the form of a cone in a special stone plate began to burn. At the very top, she added sage for purification and a clean transition to the other side.

The gold-blue flames danced, casting shadows in the cool dimness of her kitchen, and shot up higher each time she added another twig. The scent of sage filled the room, and she stared deeper into the pyre.

Then she was still.

Images began to form and she focused deeply to make them coalesce. Her limbs flexed and contracted as she gazed into the blinding flame. She saw a face, blurry at first, then clearer. It was a little girl. Then it disappeared and was replaced by a door. The door opened slowly to reveal a downward staircase. Abruptly, the door slammed shut. There were numbers on the door: 1824.

The flame flickered, then died down. Penny breathed deeply and shook her hands out. Though the vision had been only a few seconds long, she’d been in the trance several minutes. This she knew from previous experience.

She inverted a silver bowl over the pyre, then walked into her living room. The man sitting on her sofa rose, anticipation on his face.

“She’s in a house whose number is 1824. In the basement. I would search any homes in the target area with that number.”

Detective John McCarthy nodded. “Thanks.” He stopped on his way to the front door and turned halfway toward her. “I don’t have to remind you not to tell anyone, right?”

“No.” She had absolutely no intention of telling anyone that on occasion she helped Detective McCarthy solve abduction cases. Let someone else be strapped to a table, have electrodes stuck to their head, and eventually—who knew?—be put in a big old jar filled with formaldehyde.

When Detective McCarthy was gone, Penny went back into the kitchen and cleaned up the ashes and remnants of the ritual. She wiped the plate clean and replaced it in the special drawer where she kept her ritual supplies.

She washed her hands and cleansed herself by sweeping them up along her sides, then outward, while repeating “swah-hah” several times to cast out the bad juju.

After pouring herself a cup of coffee, she sat in silence in the living room for a few moments. Visions always exhausted her. They required so much energy. She was glad to be able to put this ability she had to good use, and to have the sense to use it wisely. It had taken her a while to learn how to do that, or to believe that it was okay to use it at all. It wasn’t until college that she finally decided it wasn’t wrong.

Still, it wasn’t something she shared freely. Very few people believed or understood. And more than one person had wanted her exorcised. Plus, this ability had its down side. She’d been able to help solve some crimes, and that was great, but she’d seen things she wished she hadn’t.

Including the death of her spouse.

Next week, Anne Wagenbrenner will share an excerpt from her horror story, “Walk Around on Earth, In My Body.” See you there!