On Not Shopping For a Hat 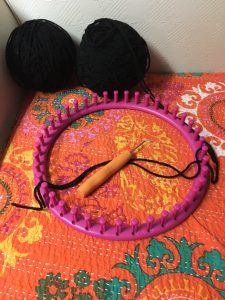 Black Friday just passed and today is Cyber Monday. I barely bought anything, although a good friend scored some fabulous—and needed—items.

And there’s the important word. Needed.

Fortunately for me, I got hit with the decluttering bug last week. It’s made me aware that I didn’t want to bring anything new into the house (not even the DVD marked down from $13.99 to $4) unless I loved or needed it.

But I need a hat. And, given the shopping holiday, I could probably score a good deal on one I like.

Instead, last night I pulled one of my circle looms out of the closet. With many YouTube videos waiting for me, instead of the quick fix of buying, I decided to take the slow route. I’m going to loom knit a hat.

I’m sure there are many people who could whip one out in a few hours. I’m not one of them and that’s fine. I find looping yarn over the pegs to be meditative and soothing. It frees my mind to think. Or not think. And best of all, it’s good to finally start using some of the yarn I stocked up on last winter in a frenzy.

There’s no major point I’m trying to make here. Shopping is fine. Not shopping is fine too. But the feel of yarn running through my fingers as I hold the loom feels really good.

Should You Write About the Devil? 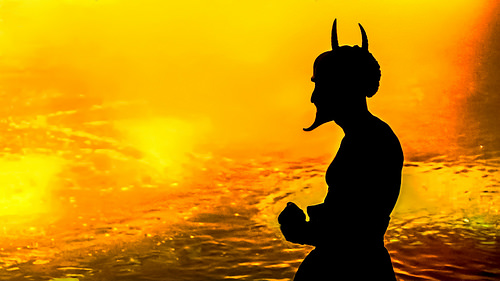 The TV show, that is. But I have friends who refuse to watch because they don’t want to attract the real deal to them. They believe in the Devil.

Another writer I know writes horror. Recently, she came across someone who told her not to get involved in things like that. That it could be dangerous.

First off, I’m not going to stop writing something because it might make someone else uncomfortable. And if they really believe that people can draw evil, or the devil, or some other malevolent entity toward them by saying their name (shades of Voldemort!), well, that’s their deal.

Do people believe that mystery writers draw murderers to them? And if I suddenly write about unicorns, will one turn up in my backyard? I admit that would be cool, but if the virginity thing is a problem it wouldn’t stay near me. Pity.

What do we do about well-meaning people who tell us to stop writing for reasons that strike us as ridiculous?

It could mean they’re sincerely worried. I’ll listen politely, although it won’t change my mind. But it could also be a bit of ego (“I know better than you, dear”) with control issues.

So here are my rules.

Writing comes from our soul. Even the dark and twisty stuff are our toys to play with on paper or computer screen (and maybe, if we’re lucky, on the TV or movie screen later), but it’s our stuff. It’s fun, it’s serious, it’s cathartic, it’s whatever we want it to be. Writing about demons who are serial killers doesn’t mean I have one in my closet. My cat likes to snooze in there and he has no intentions of sharing.

See everyone next week. 🙂

This year I went a little upstate with a friend for the day. We had three goals: foliage watching, shopping, and eating at Gasho’s. We achieved all three and here are a few pictures to enjoy (I’ll spare you the shopping):