The One Thing You Do After You’ve Published Your Novel

Everyone Should Go To Puppet Theater

Cooking Magic: A Night at the Natural Gourmet Institute

I’m not a vegan, but I was looking for something different, something tasty and out of my comfort zone. So off I went with a friend to enjoy a dinner that was developed and executed by chef’s-training-program students under the supervision of Chef Elliot Prag at the Natural Gourmet Institute in New York City.

The tables were rectangular and shared with strangers. This brought back memories of the “family style” meals I ate while vacationing in Amish country in Pennsylvania. People can bump elbows while eating, grin, and still converse with their own party. I admired the flowers strewn on the table and the starch-white tablecloth and napkins. Also appreciated was the lighting. It was bright but warm. Sometimes restaurants darken their rooms so much that I wonder if I’ll be able to see my meal. (And as someone who is hearing impaired, a dark room makes it harder to speech-read.)

The summer fruit consisted of one thinly sliced strawberry, one fig, and one fresh, ripe apricot. The “goat” cheese was made of cashew cream and the balsamic reduction and seeded crackers gave it a satisfying tang and texture. The plate looked tiny but its contents were surprisingly filling. 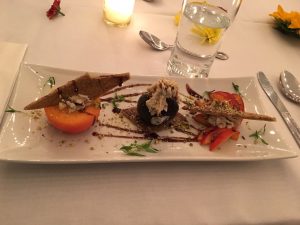 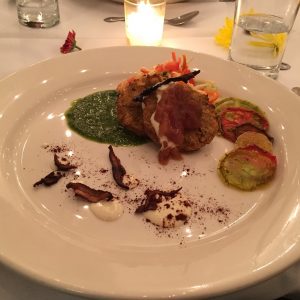 The burger was paired so well with the various sauces and spices, I wanted the recipe. (Whether I’d be able to make it is another story.) 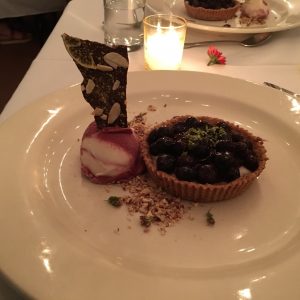 The crust was satisfyingly crisp and in the Q&A that followed, someone asked if the dish was assembled just before serving. The answer surprised us. The lime “custard” filling was added to the crust the day before. Only the blueberries were added before serving.

When someone asked about the cassis, Chef Prag did admit that it was expensive (in case anyone was thinking of making it at home). I found it perfect for a night out but would simply use plain vanilla ice cream for a great finish with the tart.

The meal was different. It was beautiful to the eye, stimulating to the tongue, and resulted in a satisfied feeling as I left the building.

If that’s not magic, what is?

You can see more about their Friday night dinners at https://naturalgourmetinstitute.com/friday-night-dinner/.