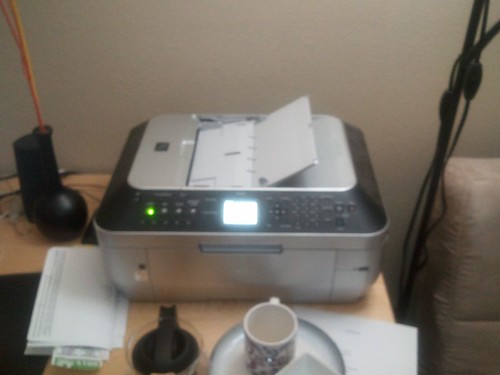 It was after 2 a.m. and I needed to print out a few pages so I could edit them. Instead of starting its normal hum, my printer began screeching a banshee’s cry of death—one that didn’t stop even after I switched it off. (If my neighbors are reading this, major apologies.)

Quite frankly, it scared the shit out of me. I turned it off! It should have stopped! At 2 in the morning, thinking “possession” is a perfectly logical possibility. I yanked the cord from the outlet and finally there was silence. And a dead printer.

Trying during daylight hours had the same result. And I felt stuck, in both writing and editing. I need to see the print on a physical page with pen in hand.

A new printer arrived but hasn’t been hooked up yet. I admit to still being a bit freaked by the demise of my old one. Prior printers passed away peacefully (aside from swearing, on my part) and the fact that this one protested so stridently has left me hesitant to just get on with it.