My Dad and Writing

The Saga of a New Writing Chair 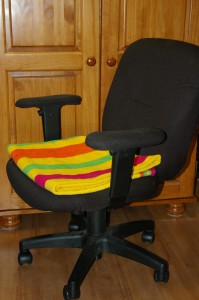 My computer chair has been everything I could ask for, but I recognize that it’s time for a new one. I just didn’t think it would be so hard. My current chair was a present from my mom and I remember us laughing as she read the directions and I slowly put it together. We were so proud of ourselves when it was completed and then laughed again when we noted that my dad would have put it together in about five minutes.

It took time to find this chair. I don’t like leather and it was hard to find a chair that wasn’t (fake leather wasn’t much in use at that time). So I bought a fabric-covered chair in navy blue with a short back and roomy seat. One of my brothers dropped in one day, saw the chair and said “Mine.” Never mind sitting on the couch or rocking chair!

But…eventually the padding wore down, in both the seat and the arms. Using a pillow changed how the chair’s back aligned with mine. So I went shopping.

I found what I thought was a perfect replacement: Fake black leather, cushy but firm enough not to get sleepy in. It was delivered yesterday and I had paid extra for the store to assemble it.

It was returned that same afternoon. Someone had assembled it incorrectly so that it didn’t tilt back. I spent hours trying to figure out what was wrong, followed by numerous phone calls to the store. They suggested bringing it back to fix but I knew I was done with it. Why hadn’t I noticed that the back was so high? Or the seat so much more narrow than my battered darling? Where was the love as I placed it in front of the computer?

So I’m taking a step back before searching again. I know I need a new chair. I just hadn’t realized how attached I was to this one. Silly, isn’t it?