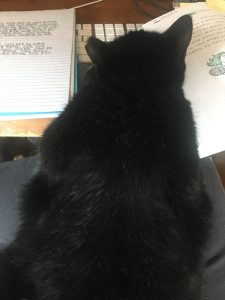 I made it through the semester! That may not seem like a big deal to some, but as someone who hadn’t attended college in a long time and chose both foreign language and anthropology classes, this was huge.

The foreign language class is the one that almost did me in. It was a lot of work. In the end, I felt swamped and stressed. Plus, I didn’t think it was fair that I ended up with the Freshmen 15 (those pesky 15 pounds that attach to your body because there’s no time or energy to cook decent food).

Everything fell by the wayside. I lived in a strange little bubble that revolved around reading, recording audio files, and memorizing vocabulary using Quizlet. But for all my bitching about it, my brain was getting invigorated with new information that I wanted to learn. And though I would have liked attending in person, Zoom classes still demanded that I be upright and dressed at a certain time.

Now I’m giving it a rest. In another week or so I’ll open that textbook and begin again, this time reviewing everything I’ve learned before moving forward. But there will be more balance. Now that I’ve emerged from that world, I realize that I miss writing. The anthropology class planted some interesting seeds in my head and I want to absorb and see what flowers on the page. The foreign language class made me aware of words. Wonderful, nuanced words.

School? I can recommend it.