Writing, Editing, Exercise—Are You Doing It?

Magical Ties is coming out in July 2016!

But so many of those heroes still have some sort of superpower or skillset that I don’t and while I love them (can’t state enough how much I love them!), once again I had trouble figuring out where I would fit in that universe as a peer. Even as a plain vanilla mortal, aside from a razor-sharp tongue (that’s figurative not literal), I know I’d be told to stay in a corner and let them protect me.

Where was the regular person?

And that’s where my main character Emily comes from. She’s a regular person surrounded by the supernatural. I’ve read stories where the regular person turned out to have special powers later on but I don’t see that happening with her. She’s going to have to figure out how to work in an area where she’s outclassed. And for me, the fun is struggling right along with her, watching her manage.

She’s coming soon, at Amazon. Hope to see you there. 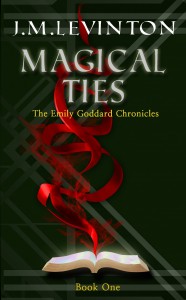