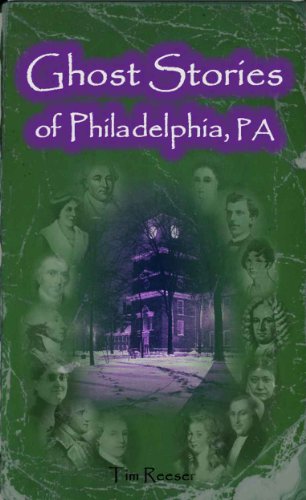 This year I went to Pennsylvania and headed into two bookstores, looking for regional ghost stories. It wasn’t that I couldn’t find any, it was that I had to choose! There were a lot of books. I had no idea the state was so haunted. (Before I go any further, let me say that the enthusiastic service I received at both Cathy’s Half Price Books in Havertown and the Barnes & Noble in Broomall was amazing.)

One of the best reasons for reading about local ghost stories (aside from getting delicious chills) is the history. Philadelphia, for example, is rich with a well-documented past.

When reading Ghost Stories of Philadelphia, PA, by Tim Reeser, I had no idea that Betsy Ross, arguably the woman who sewed the first American flag, had been courted by three men when she was young—and ended up marrying all three of them! At different times, of course.

And while spooky ghosts are a fine thing to read about, I did like the ghosts of Powel House, where the parties never ended. I don’t know if I’d want to join in, though. 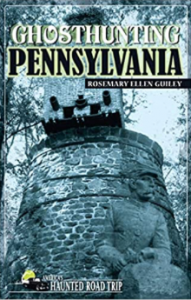 Ghosthunting Pennsylvania, by Rosemary Ellen Guiley, broadens the field, covering select hauntings from Eastern, Central, Southern, and Western Pennsylvania. For those who like the idea of spending the night with otherworldly company, it looks like there’s a decent chance of it at Hotel Bethlehem, which was built in 1920 by Charles Schwab. The first house was built on that spot in 1741 followed by Eagle Hotel, which was demolished and replaced with this current incarnation.

Mrs. Brong was an innkeeper of the old Eagle Hotel with her husband until they were fired by the Moravian Church in 1833. The Church officials were mortified by their unacceptable and outrageous behavior. Mr. Brong liked to get so drunk that he had to be laid out on a bench. Mrs. Brong shocked guests by going barefoot while she worked…Mrs. Brong is seen by staff and guests in the restaurant and kitchen, dressed in attire of the 1800s. Still defiant of the propriety of her era, she wears no shoes or stockings.

To which I can only say, You Go, Girl!

Seriously, reading these stories, articles, and eyewitness accounts reveals history in a much more interesting light than the books I read in school. (Yes, use history as a good excuse to read about ghosts. You’re welcome.)