Chapter One is Up!

Guest Post from R.G. Emanuelle, Author of Have a Bite 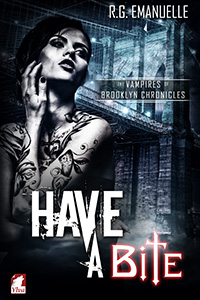 First, let me say thanks to J.M. for letting me hang out at her blog this week. Aside from our association as fellow Penheads, members of the same writing group, I’m a big fan of her work and it pleases me that she’s allowed me on her blog for a bit.

I wanted to talk about a couple of projects that I have coming out in May. One is Order Up: A Menu of Lesbian Romance & Erotica, the follow-up to All You Can Eat: A Buffet of Lesbian Romance & Erotica, which is a Lambda Literary Award finalist. Also out this month is Have a Bite, book one in my new novella series The Vampires of Brooklyn Chronicles. It’s about a celebrity chef who’s being tormented by a restaurant reviewer with a grudge. Incidentally, she’s also being stalked by a vampire hunter because…oh, yeah, she’s a vampire.

In case it’s not apparent, I’m obsessed with food. And why not? Food is the one thing in life that every single person on the planet needs to survive. The biological need for food knows no race, color, religion, creed, sexual orientation, gender, social or economic status, political affiliation, body type, or terroir.

That’s why food brings people together. It doesn’t matter who you are, where you’re from, or where you go, when you visit someone’s home, food and drink are offered to you. Certain cultures take such pride in their hospitality that they’ve made a ritual of it, and it’s an affront if you refuse what is offered to you. It’s the binding tie between all cultures.

It’s this primal connection to food that makes it the perfect vehicle to tell all kinds of stories, romance and erotica in particular. Many a romance has flourished over a special meal, whether lovingly cooked by one partner for another, made together by a couple, or enjoyed together at a favorite restaurant. A specific food favorite or dislike is often on a couple’s list of things they have in common (“we love shrimp” or “we both hate cilantro, don’t we, sweetheart?).

Erotica takes the involvement of food to another level. If you’ve ever seen 9½ Weeks or Like Water for Chocolate, you know what I’m talking about. Even the sitcom Seinfeld broached the subject of food and sex. In one episode, George Costanza discovers that the best sex he could possibly have would be the “trifecta” of pleasures: a woman, a ballgame, and a pastrami sandwich. We see (sort of) George rolling around under the covers with his girlfriend, then he pokes his head out to grab a bite of his sandwich. This to him is a great thrill. (This is not to say that I approve of the use of sports announcers for foreplay.)

Food is sensual in every possible way. It engages all the senses—sight, taste, smell, sound, and touch. Think about the things that might compel you to indulge in food. The look of a bright red strawberry. The flavor of salted caramel ice cream. The aroma of baking bread. The crackle of a barbecue. The feel of peach juice on your chin.

Doesn’t that all sound enticing? In some cases, the imageries have a direct correlation to sex (although, if your partner is making crackling sounds during sex, I’d investigate further). The textures of food—soft, yielding, slightly bumpy at times—are like the textures of a lover’s body. The flavors of food—salty, sweet, tangy… Well, you get the idea.

Which leads me to my next subject: vampires.

In my opinion, there’s a perfectly natural and logical relationship between vampires and food. Historically, vampires have always been considered highly sexual beings, mostly due to the image of a male vampire penetrating a woman with his fangs and drawing blood. But there’s more to it than that. Vampires are mysterious, potent, fearless, tireless, forever young, voracious, and, therefore, sexy. And unless you’re talking about the hideous, monstrous vampire that is soulless and evil (usually depicted as having twisted, discolored fangs), people are drawn to them. They are alluring, sensual, and the prevailing fantasy is that sex with one of them will take you to heights of ecstasy that you’ve never known.

Doesn’t that sound like a fabulous meal to you?

Seriously, when you bring together two things that exude sensuality and sexuality, how can you go wrong bringing them together?

In traditional vampire lore, vampires don’t eat or drink, except blood. They don’t need to. All they need to survive is blood. But who’s to say that they can’t eat if they want to? There’s no real logical reason to not have a vampire eat and enjoy food. On the contrary, vampires’ senses are said to be heightened, so just like they would really, really enjoy sex, they could really, really enjoy a good meal.

So, I finally get to Delphine Bouchard, my lesbian vampire chef. She’s sexy, sultry, wild—exactly what you would expect of a chef! Uh, I mean a vampire. Well, both. She is both. And in book one of the series we see her wrangle the problems of being a vampire and a chef, as well as revel in every joy that comes from being a chef and a vampire. She cooks, she loves, she battles, she bites, and most of all, she survives.

In the midst of running her restaurant and managing the relationships therein, Del tries to do damage control against a critic who has a vendetta against her, who not only skewers her with bad reviews but who she believes has been targeting her in much more dangerous ways. She also fights against her own feelings when she finds herself falling for a woman who she later finds out has a secret that both helps and hurts her. Still, she manages to indulge in the pleasures of blood and sex with the help of a particularly willing submissive. Del also has to find a way to protect herself when she discovers that a vampire hunter who has murdered several members of the New York City vampire hive has chosen her as the next target. And just to make everything as stressful as possible, she is being pressured by both the vampire Council and the governing witch coven to step back from the limelight and be less visible. As a celebrity chef, that’s a bit difficult. With the emotional support of her cousin, Dominique, and her closest friends, she battles her way through the turmoil. But does she escape the hunter? Does she allow herself to fall in love and get the girl? Does she shut the critic up? Does she make a successful pappardelle in vegetable ragu?

Find out in Have a Bite. Thanks for reading.

Listen to an excerpt here: https://soundcloud.com/badass_women_save_themselves/rg-emanuelle-have-a-bite