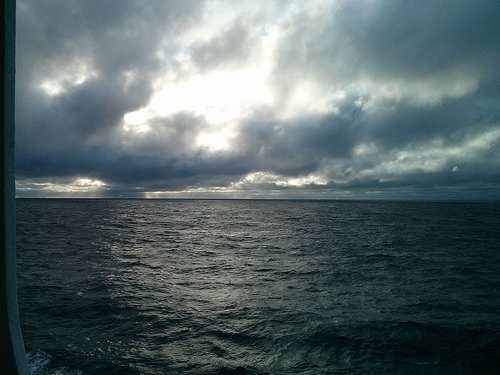 For our final installment, author Arielle Prose shares an excerpt from her story “A Sea Change.” You’ll be able to read it in its entirety later this summer in the anthology Elements: Tales From the Substratum. Enjoy!

AP: Retirement from the workforce is a long-awaited day for many people. Depending on the circumstances, you either look forward to the last day on the job or you don’t. Do you embrace the future with plans you cultivated, or do you regret leaving a job you love? Perhaps a little of both. Water is the element in this story, inspired by events in the author’s own life.

“There’s still time to change your mind,” Mindy interjects, a big smile on her face. “You can announce that it was all a hoax, that you’re not leaving and just wanted a party.”

“Ha, ha. You’re funny,” Twila says. “Another one of your begging-you-to-stay ruses, is it?” In contrast to her connection with Ruth, Twila’s bond with Mindy is more a mother-daughter relationship, Mindy being way younger than she, and always in need of advice.

Mindy pleads, “You know it is. What am I going to do without you?” She shakes her hands together in prayer, feigning drama. “Who’s going to help me with work when I’m in trouble?”

“Don’t be silly. You still have Ruth,” Twila replies.

They’re at the conference room door, on the other side of which voices can be heard.

Ruth looks at Twila and says, “Well, here we are. What are you? Scared? Go ahead, open the door.” But then she opens it for her.

“There she is!” Cruger announces. He has just finished writing “Good luck!” on the whiteboard, which is festooned with balloons.

A few people are gathered, standing around the table, which is bedecked with a flower centerpiece, and laden with pizza boxes, sandwiches, and a cake with “Congrats, Twila!” on it.

Twila, having expected something like this, is ready to smile and act all Gomer Pyle-style, shy and awkward, saying something like, “Aw gee folks, that’s mighty nice of you.” But upon hearing the big cheer that goes up, she suddenly is overwhelmed. “Thank you,” she simply says.

During the luncheon everybody chats and digs in. A few people from other departments stop in to add to Twila’s pool of well-wishers. She finds it no surprise that Natasha sits next to Claire, because Claire is an independent, neutral, take-no-sides sort, who gets along well with everyone, but rarely talks about anything personal. Without Betsy, Twila knows Natasha must be ill at ease.

Twila, sitting across from them with Mindy and Ruth on either side of her, thinks of a way to start a group conversation. “So, Natasha, how’s Kristin? What is she now? Five?”

“And how many months are you now, Mindy?” Twila asks, turning to her, “Five, right?”

Mindy kicks Twila under the table, but Twila ignores her and continues, “And you look fine, too. Glowing, as a matter-of-fact. When is your due date again?”

Ruth joins in and asks, “Natasha, what can you tell Mindy to expect—I mean being a working mother and all.”

This gets Mindy and Natasha talking. While they’re discussing how flexible schedules are a godsend, Twila congratulates herself for having been the one to break the ice. She doesn’t know if from now on they’ll continue speaking to each other—probably not—but Twila feels exhilarated, on a roll now, riding the waves.

Want to read all the excerpts? Start with J. M. Levinton’s story “Airborne.”

Elements: Tales From the Substratum 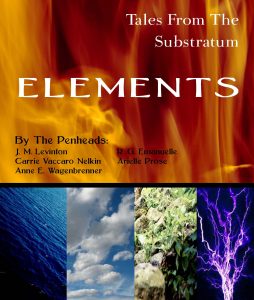